Spring is slowly making its way here in the sunny South. Some days are beautiful with temperatures where they should be, and some days are cooler than usual. I don't know what that means for the summer months, and I'm not sure the folks who predict the weather know either. There's a lot of good stuff out there on the interwebs. I'm going to make more of an effort to share some of the best with you each week.

Here are the links for this week:

Bait and switch?
Redeemed to perpetuate the name.
In the midst of crises.
In the garden.
The divine dance.

Keia has some observations on hunger.
Jared Wilson on conspiracy theories.
Todd Hiestand on the future of the Gospel.
Arthur Sido on the limits on unity.
Matt on grace.

This started in the 60s. Not surprising.
This is how to love.
Evidently, Stonehenge was a place for feasting.
Now, that's an interesting question. I have my thoughts.
This is a sad story.

As we begin to follow Jesus, we are invited to join in this dance. God created us, not to give God joy, but to receive the joy that already existed within the Trinity. We join in this perichoresis, this divine dance, by centering our selves in God. We recognize that it's not all about us, but that it is all about God. Ultimate reality can only be found in God. We are invited to play a part in that reality and join in God's story. It's mind blowing to think that the Creator wants us to be a part of what he is doing to restore the creation and reconcile all things.

This invitation also has implications for us as we enter into the dance. The first is realizing that our lives are to revolve around God. God is to be the sun around which we orbit. As a baby learns that the world doesn't revolve around him, so must we. We are to be all about doing the will of the Father as Jesus was. We are to seek his interests, exalt him, and give ourselves to him. We are to love God with every fiber of our beings. As we enter more and more into this dance, we find that forgetting about ourselves and orbiting around God is a joy rather than a drudgery.

The second implication is that we must also remember that there are others who are in this dance with us. Our brothers and sisters in Christ are dancing as well, and those who haven't come to faith in Christ are to be invited to join us. That means that in our relationships with other people, we are not to expect them to orbit around us. We do not expect them to give to us, build us up, or serve us. The opposite is true. As we dance, we recognize that we are to orbit around them. Their interests, their needs, their good is what we are to be about. This means we are to forget about ourselves. That is a hard thing to do. Our natural tendency is to make sure that we get ours, and then maybe we'll give to others. We do this with our money, most obviously. We also do this with our time and energy, and our talents and gifts.

I believe this lack of dancing correctly is a major reason why churches are ineffectual, and why community is so hard to find. A group of folks who expect everyone else to orbit around them and their interests will quickly fall into conflict and will cease to exist. It is only in the dance God has called us to that we can truly find the love and acceptance we all desire. It is only when we forget ourselves and dance in our orbits around God and around others, that we find joy. The old children's song that spelled "joy" as Jesus, others, and you, was actually pretty much on the money. That is the dance, moving in and out, around and around, in a constant relationship of mutual love and service.

Tomorrow is World Malaria Day, a day to remember those who have been devastated by this preventable, treatable disease. Today, World Vision begins a two part series on families affected by this disease. Part 1 is here.
at April 24, 2013 No comments:

There is good news in the fight against global poverty. According to a United Nations report, the percentage of people living in extreme poverty around the world fell from 43.1 to 22.4 between 1990 and 2008. World Vision is one of the many groups who have contributed to this success. To read more and find out how you can help, check this out.
at April 17, 2013 No comments:

Repost: Who Are You? 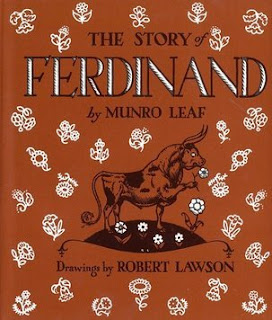 
I'm sure many of you remember the story of Ferdinand the bull. Ferdinand was a bull in Spain who was unlike all the other bulls. While the other young bulls were doing normal bull things, Ferdinand was content to sit in the shade of a cork tree and smell the flowers. Even when some tried to make Ferdinand act more like a normal bull, he remained true to what he was and lived out his days sitting in the shade and smelling flowers. The book ends with, And he was very happy."
As I listened to the story this morning, I thought about the lessons that followers of Jesus can draw from this story. We can be pulled many different ways by those who want us to conform to their image of what a Christian should be. Some will say that we should adhere to a particular set of doctrines and rules in order to be "right with God." Others will say that we should belong to a particular political party and subscribe to a certain political philosophy. Still others will say that we should just keep our beliefs private and not let our practice leak outside the church walls.
When Jesus called his disciples, he didn't call each one of them to follow him exactly the same way. He called fishermen, a tax collector, even a political radical. While they all learned the same things, how those things worked out in their lives and ministries was different for each one. Some were called to give the Gospel to Jews, others to Greeks and Romans, still others to India and other places outside the Roman Empire.
So it is today. Jesus calls us to give everything up and follow him. That means different things for different people. Some are called to turn from their reliance on material things and use their wealth to help others, while others are called to sell everything and live as one of the poor. Some are called to teach, others are called to serve behind the scenes. Some are called to be giants of faith, and others are called to have faith in the midst of their doubts. Some are called to have great, well known ministries, while others are called to work in obscurity, waiting to hear the Master say, "Well done." Most of us will fall somewhere in the middle.
The worst thing we can do is try to follow Jesus exactly the same way that (insert name here) does, or try to follow in a way prescribed for us by others. If we truly believe that Jesus has given his Spirit to teach us and guide us, then the One whose opinion we should seek is the One who is presented to us in the Gospels.
Be encouraged on your journey. Jesus has promised to teach us the way the he wants us to follow him. That path will take us places that others are not going to visit, and it may well leave us open to criticism from those who don't understand our journey. It doesn't matter, because in the end, what counts is the approval of the One who loves us and gave his life for us.
at April 15, 2013 2 comments:

Mention the word idol and some people think of figures made out of wood or metal that "heathens" worship. Or their thoughts turn to the scene in The Ten Commandments where the Israelites are dancing around the golden calf. In a lot of Christian circles, an idol is something such as drinking, entertainment, or some other "sin" that keeps a person from becoming a Christian. It can be any of those things, but I think idolatry is more insidious and widespread than we would like to believe. We Christians can have idols.

An idol can be a particular preacher that we like to watch on TV or hear on the radio. It can even be the leader of our local gathering. It can be an author that we love reading, or a blog that is important to us. It can be a set of doctrines, and the correctness of those doctrines. An idol can be our faith, or our doubts. We can make an idol of our humility. An idol can be our family, or our relationships with friends. Our community of believers can be an idol, as can the very idea of community itself. We can even make an idol of God, or at least our concept of God.

Essentially, an idol is anything from which we find our identity apart from God. There are so many ways we try to get our identity, and it is very easy to put those things in the place of God and how Jesus wants us to follow him. As followers of Jesus our identity can only be truly found in Christ. All of the other things in our life, whether they are things of this world or things that a gracious Father has given us are not what life is about. Life is about Christ, and following him. He may or may not grant us certain things, but our calling is to simply follow. That means putting our self, and everything that goes along with our self, to death and finding our life in Christ only.

Father, help us to find our life and identity in Jesus Christ. Help us to keep you first and only. Be our all in all.
at April 11, 2013 1 comment:

After a great weekend remembering Jesus' death and celebrating the resurrection, Jan and I traveled to Savannah, Georgia for a few days. We had a nice time walking all over the historic district, and enjoyed some beautiful weather. Spring has finally arrived here in the sunny South. Of course, that also means pollen and yard work. The college basketball season comes to a close Monday, and those of us who are fans will have a void that won't be filled until October.

Here are the links:

We were a part of this.
Seasons.
Enjoy.
The challenge of Pope Francis.
The beauty of the earth (HT: Jake Belder).

I'm not sure this would be a good idea.
Good post from Lisa Dye.
Good post on fellowship.
Wayward Son on desire.
A poem from Keith Giles.

Ruth Wilson was found in the mess.
Zack Hunt is frustrated.
Chaplain Mike begins a series on Easter.
Kathleen on division and true religion (HT: Alan Knox).
The second turning.

I hope spring has arrived in your part of the world. Have a blessed week!
at April 07, 2013 No comments:

It's been a while since I've written here. Life has been happening the past few months. I have decided to start fresh, so I'm mo...